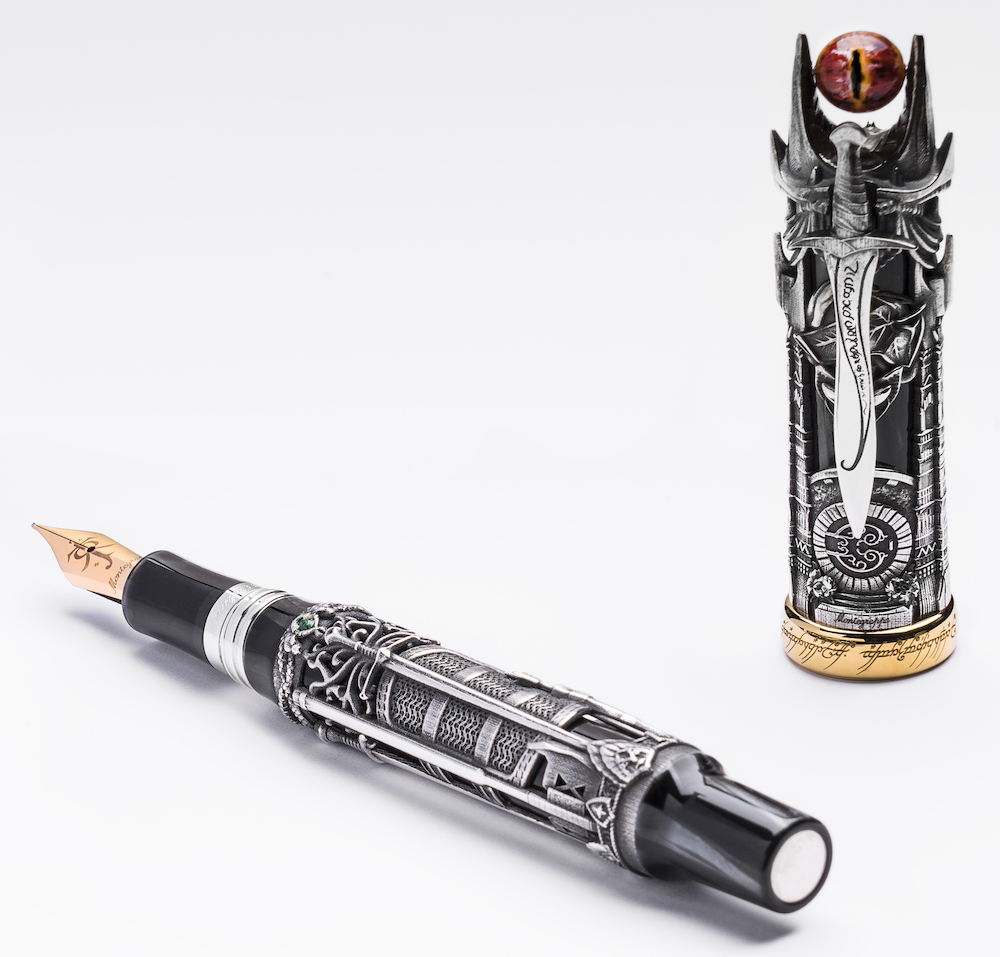 ONE PEN TO RULE THEM ALL: MONTEGRAPPA MEETS MIDDLE-EARTH

As legions of Lord of the Rings fans eagerly await news of a lavish new production based on Tolkien’s universe, Italy’s leading name in luxury pens has made one of its own.

A blockbuster movie franchise based on one of history’s best-selling book series is a logical place for obsessives and collectors to congregate. J.R.R. Tolkien’s epic Lord of the Rings trilogy is estimated to have sold more than 150 million copies since its publication in 1954-55, while Sir Peter Jackson’s movie trilogy (2001-03) grossed $3 billion at the box office before finding its way into more than 100 million homes. The extent of its influence is evident in the continuing popularity of fantasy titles nearly two decades later, including secretive ongoing efforts to create a serialised television prequel.

While the notion of dedicating luxury pens and watches made to famous artistic works is not new, the level of engagement and immersion fans have with their favourite works demands that tribute products offer something richer and deeper than traditional merchandise. It’s a point the man at the helm of Italy’s oldest writing instrument-maker understands well: “Modern consumers demand much more than a vintage vibe and a token signature etched into the side.”

Giuseppe Aquila is CEO and Creative Director of Montegrappa, a brand with a proud record of making pens beyond conventional expectations – and budgets. “Our customers see pens as something magical: an object to admire as well as a tool to inspire and fuel their own creativity.” A solid gold limited-edition tribute to The Lord of the Rings is his company’s latest extravagance. It’s a design that uses every molecule of precious metal to memorialise the cinematic vision of Tolkien’s world.

The result will resonate particularly well with those who discovered Tolkien through the movie trilogy, with more than two dozen individual elements recreated in the style of Peter Jackson’s Middle-earth. “Well over a year of development has gone into this pen, working closely with New Line Cinema representatives to ensure a level of detail to enchant the most demanding fan.”

From the hand-enamelled Eye of Sauron hovering ominously within its cap, down to detailed reproductions of Fellowship regalia around its barrel, aficionados of Middle- earth will find much in this limited edition to tempt them. Most precious of all is a replica of the One Ring, provided in place of a conventional capband, which can be left on the pen, or removed to be worn or carried.

Montegrappa and its followers are no strangers to the fantasy genre. The brand has recently completed an extraordinarily successful collaboration with HBO for Game of Thrones. Already back in 1995, Aquila was a fresh-faced university graduate when he developed “The Dragon Pen” – a move which practically kickstarted the movement towards collecting contemporary pens.

“Our expertise in ancient jewellers’ techniques like lost-wax casting lends itself particularly well to fantasy’s elaborate, other-worldly ideas,” he explains. Pens are an interesting proposition that collectors and super-fans often overlook: “We work in a scale between traditional jewellery and collector models. The difference between our products and other high-end collectibles is that pens are made to be used as well as admired.”

One pen to rule them all. Our tribute to J.R.R. Tolkien’s beloved trilogy is made with a level of craftsmanship to rival the great Elven-smiths of Eregion. The Lord of the Rings Limited Edition is a magical creation of lost- wax casting that celebrates imagination, creativity and heroic journeys at their finest.

Tolkien’s epic fantasy is one of the most successful works of fiction in history, with more than 150 million copies sold, and close to $3 billion in global box-office earnings. Several major readers’ polls rank The Lord of the Rings as the best- loved book of all time. Enjoyed by readers young and old, it is celebrated in both literary and pop culture circles.

Armaments and regalia belonging to the Fellowship of the Ring make up the elements of the barrel. Gandalf’s staff, Aragorn’s sword and Gimli’s axe are just some of the icons contained within a structure crowned by an emerald (Cubic Zirconia for Sterling Silver) set in the emblem of the White Tree of Gondor.

The cap’s major features are a hand-enamelled Eye of Sauron suspended in the Tower of Barad-dûr, and a clip resembling Frodo’s Elvish blade, Sting. In place of a conventional capband sits a removable replica of the One Ring, inscribed with Tengwar script and made from 18k Gold (gold-plate for Sterling Silver). 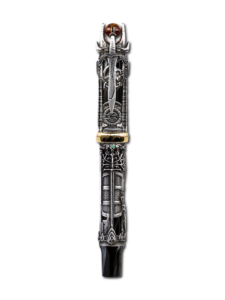 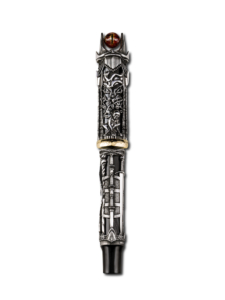 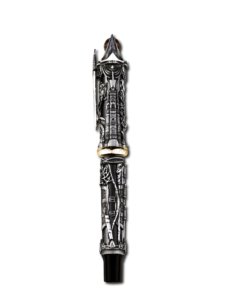 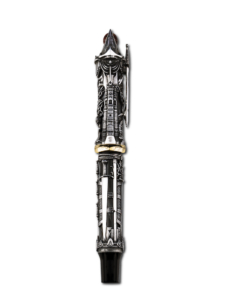 Lord of the Rings LE Gold