As Italy marks 700 years since the death of Dante Alighieri, the country’s leading penmakers are dedicating a new limited-edition series to its greatest literary treasure. Discover the many layers of Dante’s Divine Comedy with the sinfully priced Dante Alighieri: Inferno by Montegrappa.

“The devil is in the detail” is a label often applied to Italian design, but the country’s oldest penmakers appear to be taking it literally. The newest extraordinary creation from Montegrappa features Lucifer himself on the base – chewing incessantly on Judas. The demon’s pointed tail seems to rise through the barrel and snake its way through the cap to form a pocket clip: the kind you might expect to see brandished by Robert de Niro in Angel Heart. This is no pen for the timid.

Dante Alighieri: Inferno is the first edition from the Venetian maker’s new Divina Commedia writing series – a tribute to Italy’s most celebrated literary figure. 700 years after Dante’s death in 1321, his name rings eternal – even to the uninitiated. In Italy, he truly is immortal. By daring to write his most famous work in Florentine dialect, he paved the way for the use of a unitary language which later became the Italian.

The first volume from Dante’s epic trilogy is also the poet’s most vivid work, describing hell’s descending layers with equal measures of beauty, satire and gore. If biblical horror were a genre, Inferno would be its crown jewel.

Montegrappa’s tribute spares little detail from Dante’s script, with the sins and punishments of hell’s nine circles recreated in intricate micro-sculpture. Sins of self- indulgence are represented on the cap by lust, gluttony, greed and wrath. The violent and malicious sins – violence, fraud and treachery – are reproduced on the barrel and blind cap.

The artisanal process behind Dante Alighieri: Inferno is rarely found outside the world of fine jewellery, but Montegrappa’s command of lost-wax casting has made it a darling of aficionados. Iconic archive models like The Dragon (1995) and the skull-encrusted Chaos (2011) won plaudits for their bold and complex metalcraft and point to the maker’s pedigree in creating beauty from dark subject matter.

With Dante exhibitions and tributes planned throughout Italy in 2021, the timing of Montegrappa’s release is both punctual and – after the torment of last year – oddly topical. True to the maker’s tradition, the story is told with opulent extravagance: options in silver and 18K yellow gold have been issued in editions of 333 and 9 pieces – a nod to Dante’s famous terza rima structure. Dante Alighieri: Inferno is housed in a custom case styled on an antique leather-bound edition of Inferno 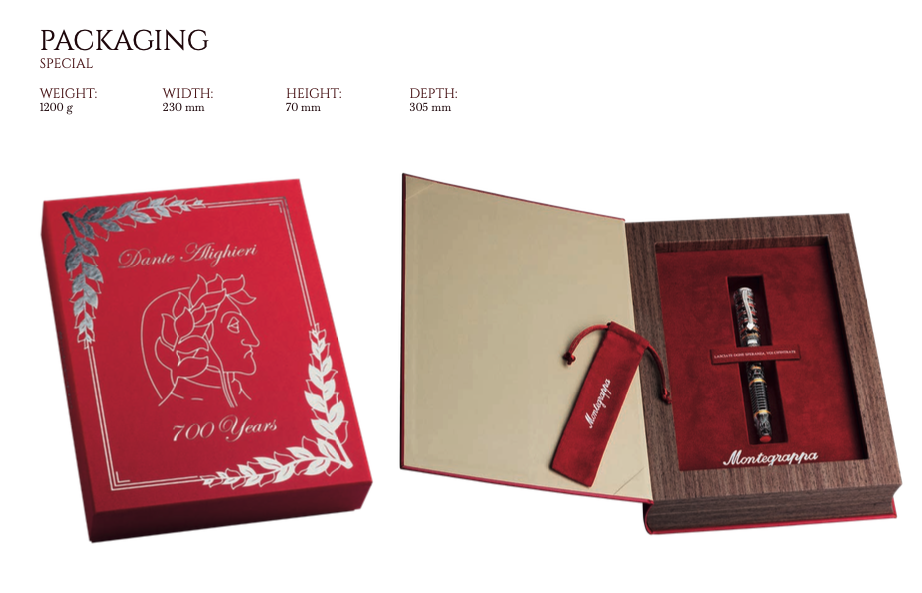