See the brochure for the Montegrappa Blue Blazer here.

Inspiration comes to us at Montegrappa from a variety of sources and places and events and objects. All celebrate some aspect of life, and what enriches it. In the wake of the great success of the Mule line, inspired by a famous cocktail, we looked again at another favourite tipple, the Blue Blazer. 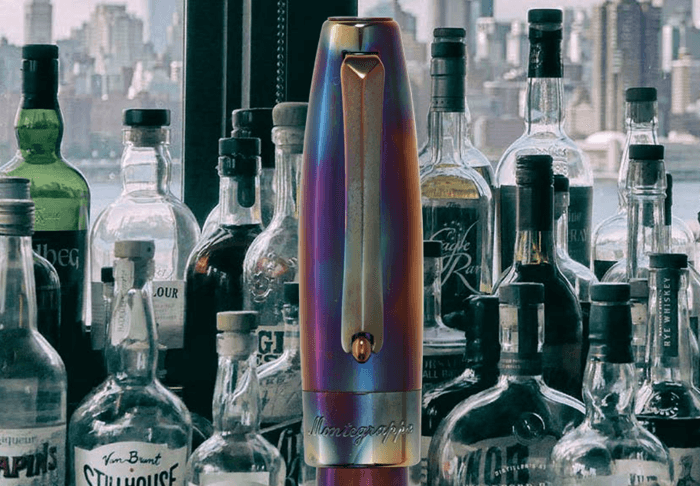 An enticing mix of scotch, boiling water and powdered sugar, the Blue Blazer earns its incendiary name from the theatre that accompanies it: the drink is set alight. Celebrating its 155th birthday this year, the Blue Blazer is said to be the first cocktail to undergo the touch of the flame. Most distinctively, the drink is prepared with two large tankards, between which the stream of flame travels.

Our Montegrappa Blazer is based on the Fortuna shape, but with its cap and body made, appropriately, of fire-burnished stainless steel with a vintage-looking brushed silver trim. The polished steel surface of the pen barrel and cap basks in bluish, iridescent shades, just as a heated metal would do.

Available as fountain, rollerball and ballpoint pens, the fountain pen’s nib will be made in steel and will carry Montegrappa’s filigree etching. It will be offered in the writing grades of Fine, Medium and Broad, and is converter or cartridge-fed.

As a companion to the Mule, the Montegrappa Blazer will appeal to those who value authenticity, craft and a good, stiff drink. To assist in this pursuit, every Blazer pen will be delivered with a special Blazer tankard as a gift, as is traditionally used to prepare the drink and customized with the new logo. Celebrating even further the joys of the Blazer is our new, Italian spin on the classic, made with grappa, sugar, cinnamon and orange essential oils! 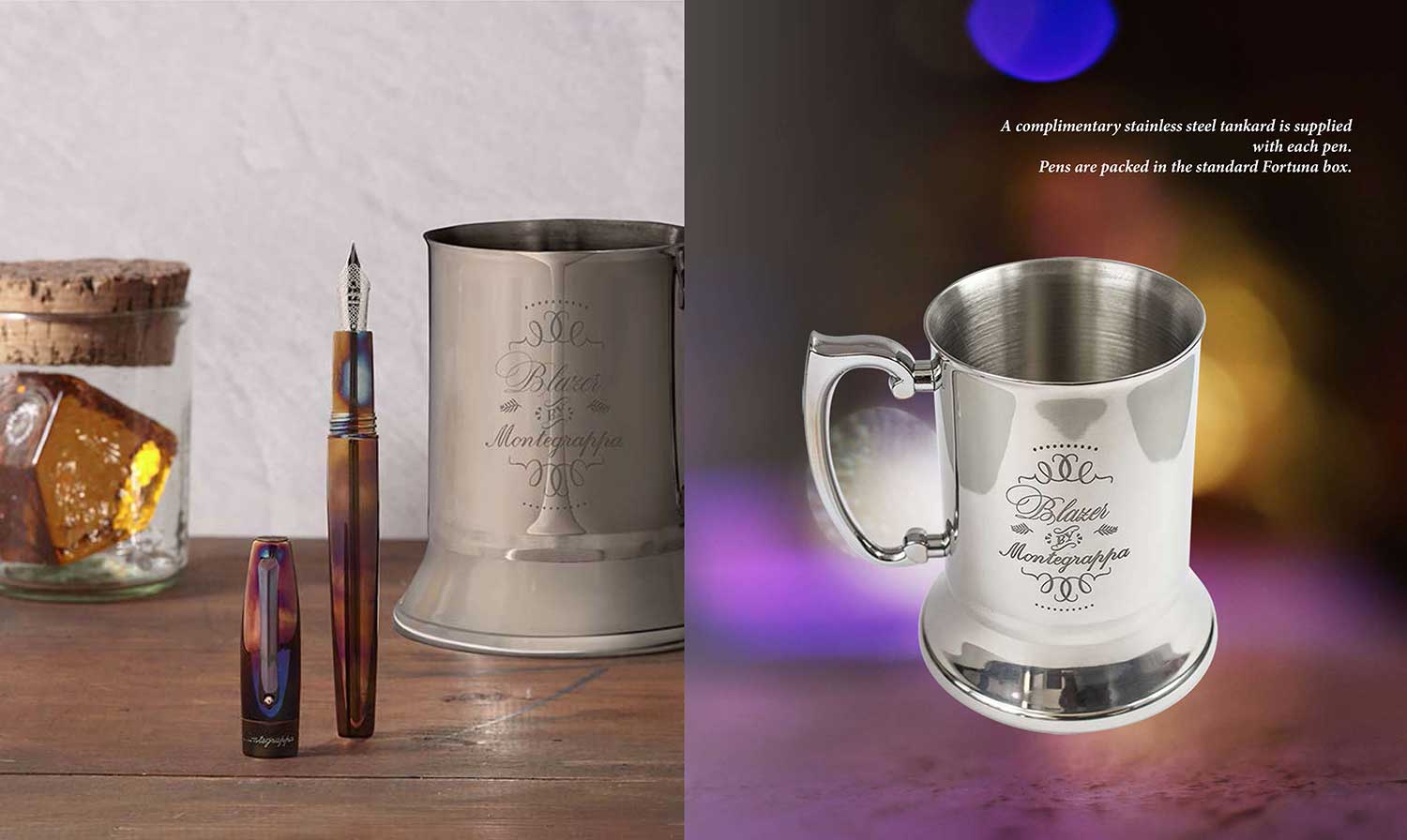 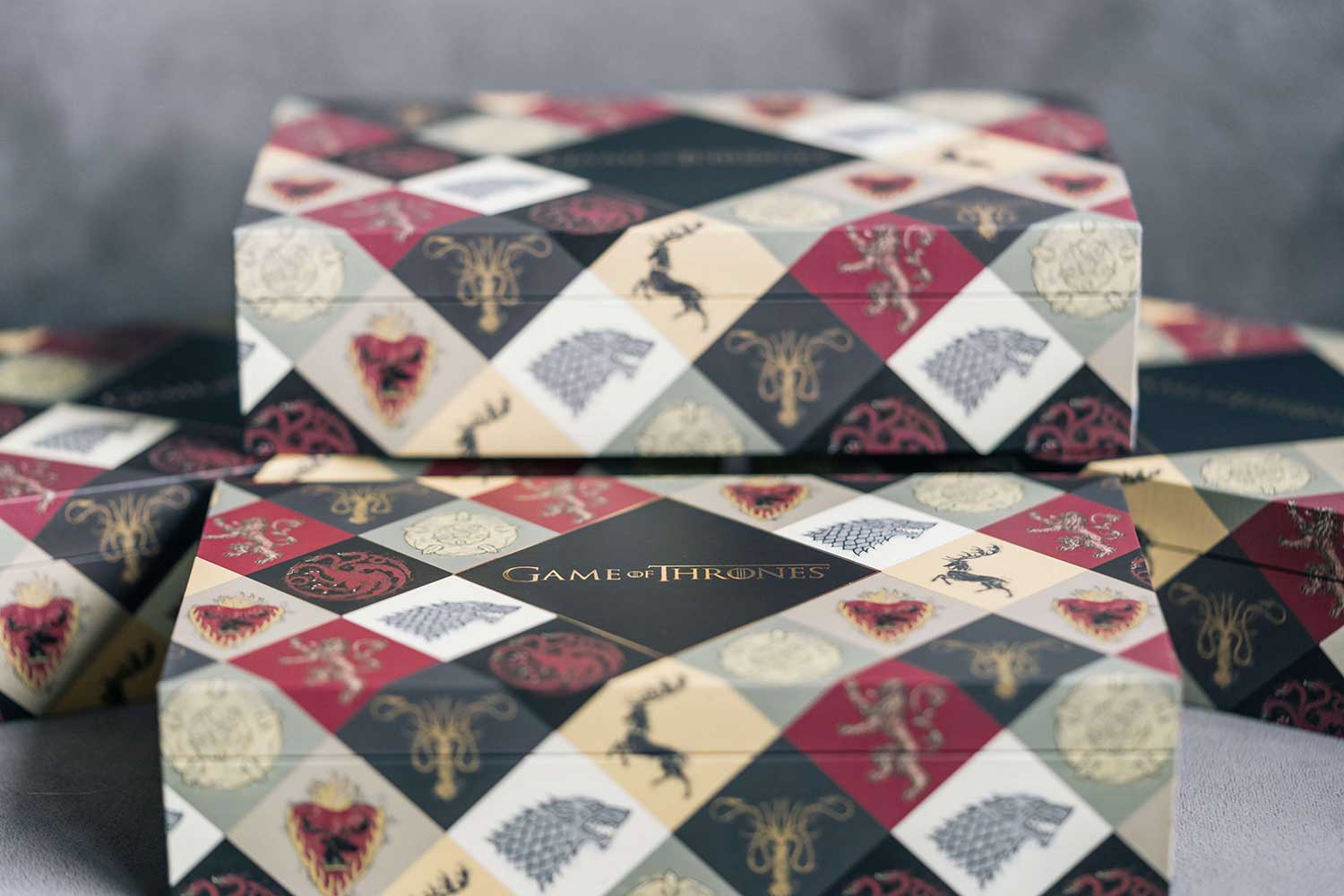 With its epic storylines of treachery and nobility, family and honor, ambition and love, and death and survival the hit HBO ® series Game of Thrones has captured the imagination of fans globally
and made it one of the most popular shows on television. Montegrappa is proud to announce a series of writing instruments that convey the grandeur of this most remarkable saga.

Montegrappa’s collection of writing instruments represents of each of the four key families: Stark, Baratheon, Lannister and Targaryen. Each is available as a fountain pen, rollerball and a ballpoint pen. The desirability of the pens is enhanced by a collective style, each pen individualised for the family it represents through sigils and emblems representative of the clan.

All barrels and caps are made with colourful lacquered surfaces, while the trims are fashioned of palladium, 18k gold or bronze plate, with “Game of Thrones” engraved on the cap ring. All of the fountain pens’ nibs are formed in stainless steel, decorated with a sword, and are available in the four writing grades: Extra Fine, Fine, Medium and Broad. The fountain pen is both cartridge and converter-fed.

Montegrappa’s Game of Thrones pens arrive in a double box consisting of a rich, black outer carton bearing each family’s symbol. The inner box is covered in material evoking the styles of the historical period that inspired Game of Thrones, with sigils and patterns relevant to the four families.

Baratheon: Coloured a sombre charcoal, but accented in contrasting yellow gold, the House Baratheon pen features a stag’s head for its pocket clip, with a stag rampant on the cap’s top, above the motto, “Our Is The Fury”. A fleur-de- lis pattern decorates the cap. 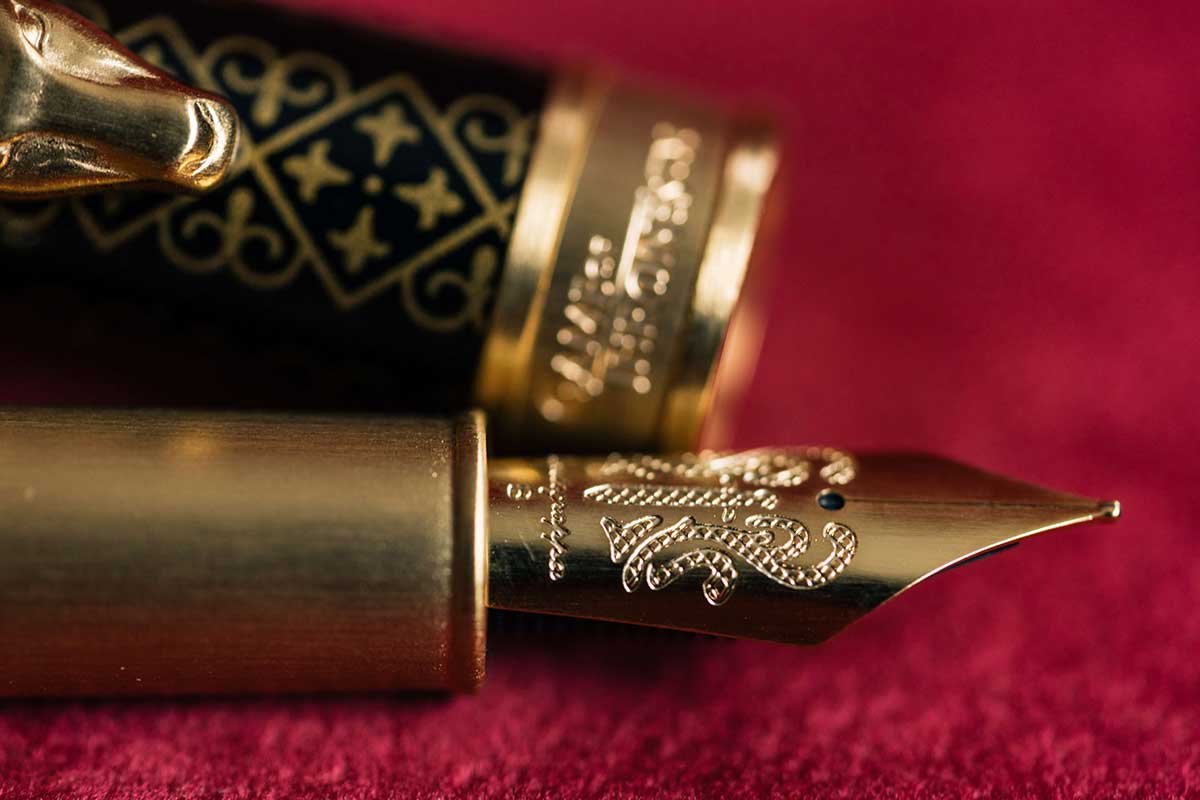 Lannister: For House Lannister, a regal red accented in contrasting yellow gold is the dominant colour. The House Lannister pen features a lion’s head for its pocket clip, and a lion rampant on the cap’s top, above the motto, “Hear Me Roar”. A floral pattern, reminiscent of the Tudor Rose, decorates the cap. 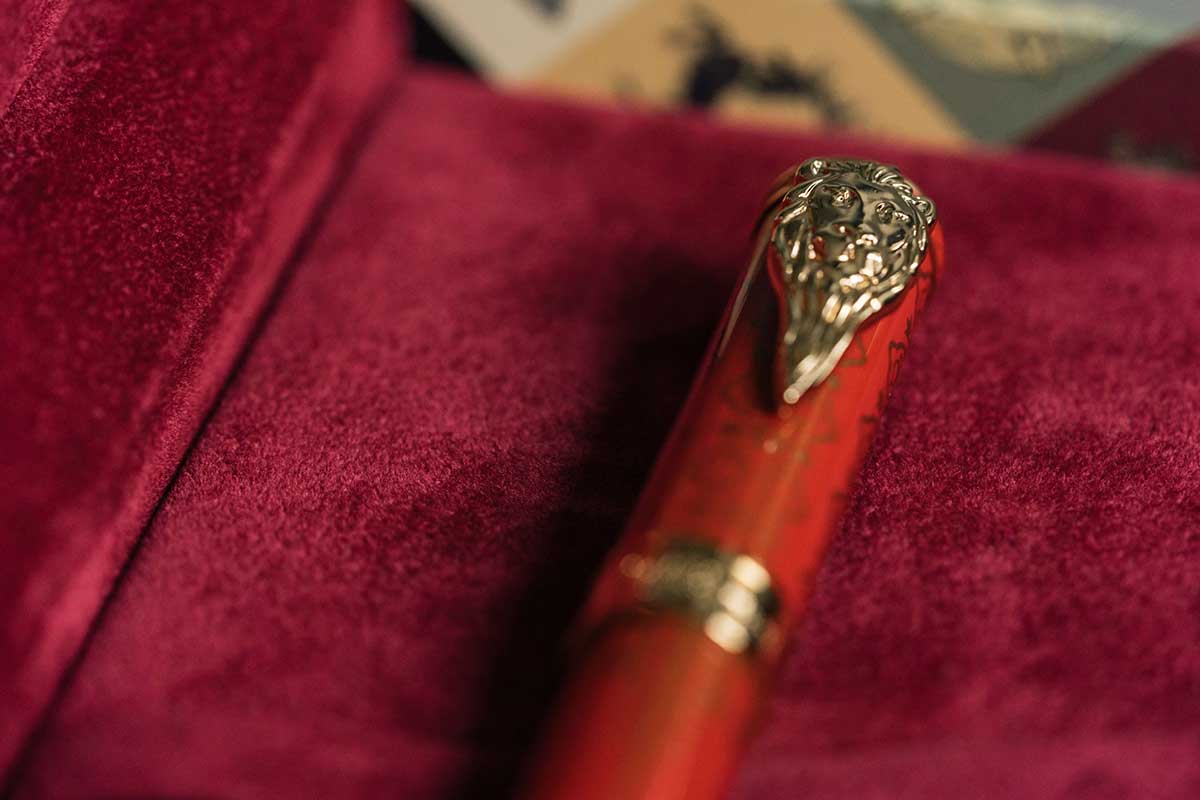 Stark: With House Stark’s northern origins, the colour chosen for the family’s pen is a silvery-white, accented in palladium, conveying winter. The cap is patterned with a runic symbol reminiscent of Norse artistry. A direwolf’s head forms the pocket clip, while the top of the cap shows the direwolf’s profile, above the motto, “Winter Is Coming.” 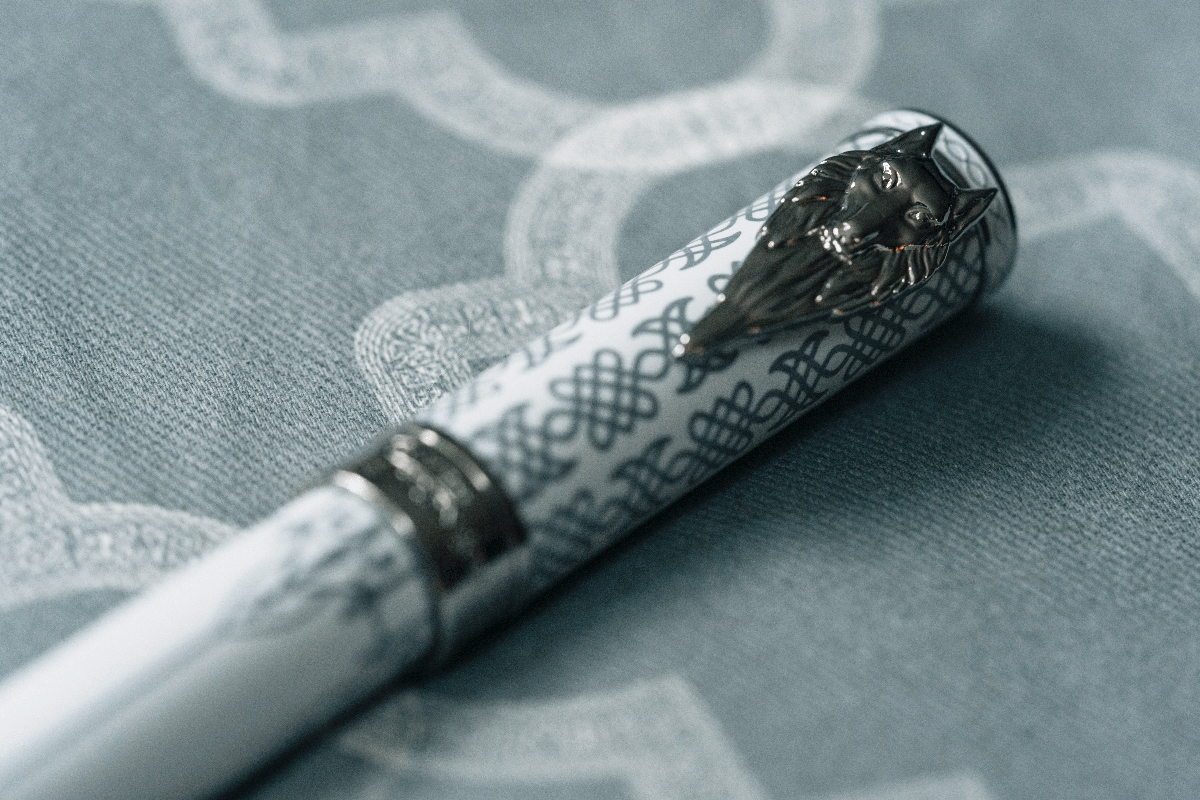 Targaryen: Only a fiery, metallic red against a coal-black background could represent House Targaryen. Naturally, a dragon’s head forms the pocket clip, while a dragon coils above the legend, “Fire and Blood”, on the cap’s top. A filigree pattern graces the cap. 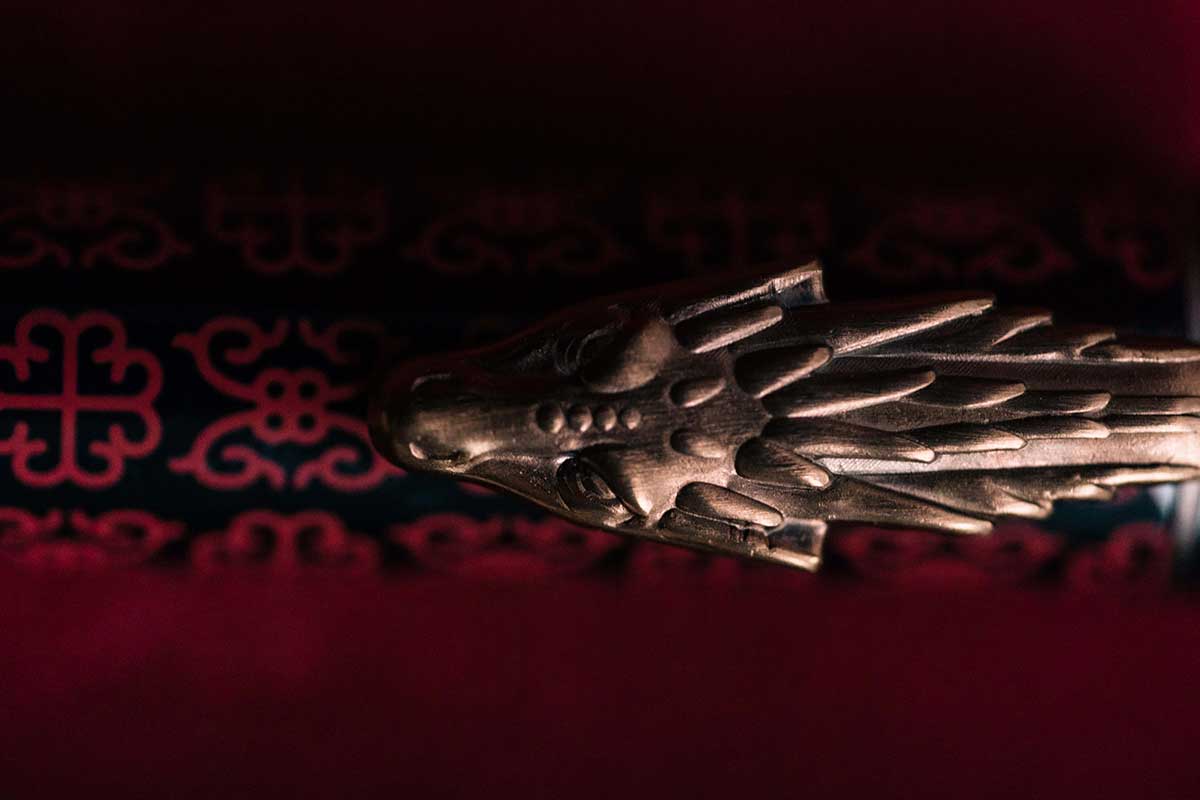